One fine day, no one knows where the strange cute creature came from. Whether this funny kid has arrived from another planet, or is an ancient inhabitant of the Earth, awakened from a long sleep is for certain unknown. It is clear in all this confusing history, only one, he settled in the virtual world to entertain children and adults. Since the first time they met a small green creature, it was possible to find out that he loves sweets most of all, and is ready to eat them in huge quantities, for which he was nicknamed Am-Nyam. This hero has opened a whole new direction of logic games, in which the main goal is to feed different characters, having solved many problems. 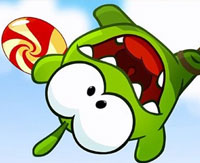 The games Cut the rope will be played by users of all age categories, they are very fascinating, and most importantly useful. All versions are created in the genre of puzzles, but unlike classical logic games, they are funny and dynamic. The main task is to cut the rope correctly, so that the delicacy tied to it fell directly into the mouth of the hero. At first glance, the task is very simple, but do not underestimate the developers, they did their best to make it was not so easy.

In all game versions, the laws of physics correspond to reality, so users will have to take into account the speed and flight trajectory, as well as many other factors complicating the task. The first levels will seem easy even for children, but the more players move forward, the more difficult tasks are put before them, they may need more than one attempt. 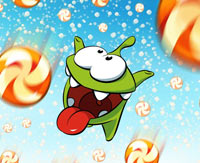 V Game Cut the rope free play can be any amount of time, the authors have not set any limits. Solve the tasks from level to level will have to be independently, there is no opportunity to spend real money and skip ahead or to ease the task. Only the right actions will bring a sweet taste of victory.

Free games Cut the rope are released in several parts, in all versions there is a small green creature with a big mouth, into which even the biggest candy can easily fit, and the task is to get candy in his mouth, cutting the rope in time. The place of what is happening and the image of the hero is changing from version to version, for example, with him you can go on a journey through time. Am Nyam will become Ancient Egyptian Pharaoh or Roman ruler, or may throw it into the open sea on a pirate ship. 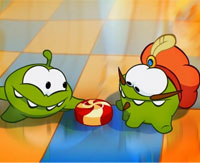 The series of games became so popular and acquired so many fans that other games appeared. Cut the rope. In them you can meet with different characters and creatures, for example:

The principle of all games is the same, the object is kept on the rope system, cutting one after another at the right moment, players need to get to a certain place, Nyama's mouth or to a friend bear, collecting all the bonus stars. The problem is complicated by the fact that the ropes can come to life and run away from the mouse cursor, or the moving rounds will suddenly appear on the playing field, only one moment will be advantageous, and sharp spikes can destroy the culinary delicacy. All the games Cut the rope online, to switch from one version to another is not necessarily to download them to the hard drive, they run directly on the site in any browser. There are no registration procedures in games, so that everyone can try their hand at solving gay tasks.