3 Pandas games will introduce users to the cute bears, who are in trouble. Instead of a quiet life in shady bamboo forests, these little animals will have to fly around the floor of the world, cope with the most dangerous situations and experience many exciting moments, and players should help them in this difficult adventure. 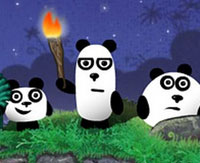 This story was so popular with children and adult players that the authors created a whole series of 3 panda games. It belongs to the genre of logical puzzles, so you have to think carefully over each step so that the bears can move on to their goal. Their journey will take place in different real and imaginary countries, pandas will visit:

Wherever they are, they are trapped by dangers, whether they are vicious pirates or simply a harmful city resident with a broom at the ready.

May be in the game 3 Pandas play online, none of the versions do not have to download and install on the hard drive. As soon as there is free time, you will be able to transfer to virtual reality directly from the site and help funny pandas. All games are free, they do not provide built-in purchases, so you'll have to use your own intelligence. 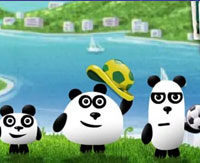 The story begins with the fact that the pirate ship has moored to the unfamiliar coast of the island lost in the sea. Gentlemen of luck were looking for treasure, but they could not find anything, from such a failure they became even more angry, but then they caught the eye of a strange creature – cute bear black and white. The corsairs immediately ripened the plan, to catch the little animals and sell them on the mainland. So began a long, difficult journey of one family of pandas, bad people managed to catch mom, dad and sweet baby. Put them in a cage and put them on your ship.

The first part of the game online 3 Pandas offers players to help the family escape from the ship. If at the first levels everything is simple enough, the authors everywhere set up hints, then after training you will have to show wit to complete the game to the end. A lot of obstacles are waiting for the bears on the way, but they also have tricks in reserve, despite the slowness, these animals are good at jumping, especially if mom and dad throw the baby to the altitude. They get to climb on each other to get something or to lower one, clutching at the paws and forming a chain. 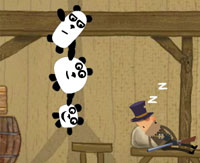 In the second part, the survivors will have to undergo a new test. The boat approached a small island inhabited by aborigines. If you get into their hands, then instead of a glorious future, the family will become a supper for savages. Here, bears can not do without the help of players.

The incidents continue, the pandas manage to fly away from the hostile island, but they were found on board the aircraft and did not come up with anything better than just drop them overboard. The landing was mild, and parents with the baby are on the streets of Brazil. Locals have not seen such exotic animals before, and pandas once again have to flee further.

The fate brought the heroes to Japan, this country turned out to be more friendly, but for every service here you have to pay. If the family wants to take the help of people, then it is necessary to work, harvest apples from the tree and give the farmer to take it, or the fisherman to help with the catch. Games 3 Pandas online are very funny, they have well thought out stories and good mechanics. The quality of graphics at a high level. For greater realism, all actions are accompanied by sound effects.