V game Red ball for free to play like children and adults alike to spend time and relax in front of the computer monitor. Sports competitions with the ball there is a huge amount, but in the virtual world a small ball can come to life and become an independent hero, caught in incredible stories. That's exactly what happened, in the section collected the adventures of the red ball, each subsequent part of this series confronts the hero with new challenges, throwing players a challenge. 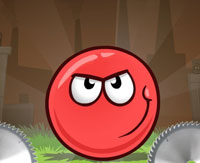 All Red Ball games are online, they do not need to be installed to find out how interesting this particular version is. Payments are not real money in any game, the promotion of the levels depends solely on the dexterity and ingenuity of the players.

When the game was released, the Red Ball 1 was so popular with the players that after its release the authors created two more parts of the sequel and divided the fourth game into three editions, with a ridiculous six games released. Starting playing with the first part and having overcome all the tests, users can continue the adventure with a charming hero for a long time.

Review of the series of games Red ball

The first part of the game will send the hero on a dangerous journey, he will face many tests, which will be more difficult to overcome from level to level. On the way of the character traps are arranged everywhere: 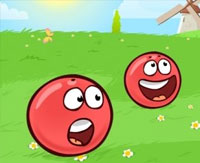 In order to go all this way, you need to quickly manage the character and think through the action a step ahead. After part of the distance is passed and the player reaches the red flag, if a misfortune happens to the hero, he will appear again on the marked point.

In the second part of the game the Red ball appears plot. Now the ball is wearing a crown, he is a monarch in his world, but everything is fleeting, a gust of wind blows the character to an unknown place, the crown is lost. The ball is upset, but does not despair, he will go with the player in search of his symbol of power. There are twenty levels in this part, so you do not have to be bored. 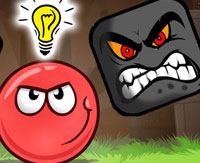 Game Red Ball 3 continues the adventures of a bold ball. Now he has a real enemy, our hero is in love, but a villain, a black ball, kidnaps his bride and takes him to an unknown destination. The hero has to go through a difficult path in the name of saving love. He will climb onto the steep mountains and jump over deep cliffs, cope with the obstacles and deadly structures built by the rival. In the end, he expects a reward of –. The love of his life will give him his hand and heart.

Game Red Ball 4 consists of three parts, in them a brave ball must save everyone, including the planet from a terrible enemy. Somewhere on the expanses of the virtual world a cube appeared, he hates everything round. The villain invented the machine making balls square, after these experiments the attacker had an entire army of cubes. In these games, a red ball can fight with opponents, it only needs to jump on their head, as they disappear in the blink of an eye. In these frequent authors, the game complicated, then the real laws of physics began to operate, the hero can no longer roll on the steep mountains, he will have to build his own constructions for ascents.

All games The red ball is very funny, they have wonderful graphics and well thought out controls. Riddles sometimes seem very complex, but if you practice a little, but there is nothing insurmountable. During the game, zapping instrumental music sounds, which gives the dynamics what is happening.