Games Dolphin show on the crest of glory

Most of people in their childhood dream of becoming artists, others are attracted to dancing, others prefer music. Performing on the stage will turn out, not only performing compositions or playing plays, trainers with their wards tear as much applause when they make stunning tricks. Games Show dolphins will allow everyone to feel themselves in the role of the artist, who trains the most lovely animals on earth. 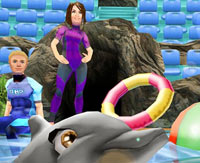 Delfins, are considered one of the most intelligent mammals. Scientists for a long time study their habits and are sure that these animals have their own speech. They are famous for their kindness, you can find not a few stories about how dolphins helped people at a difficult time or saved them in shipwrecks.

The first released game was recognized among users of different ages. The authors did not stop at a single version and saw seven more releases plus four bonus parts. In each of them, players will take care of their dolphin and will teach him to make dizzy pirouettes on the water surface. Only when the trick can be performed perfectly, the player will receive the maximum number of points.

Start playing free games Dolphin show is simple enough, you just need to click on the version you like and the application will launch in just a couple of seconds right in the browser window. Even children can cope with this, and when the trainer and dolphin trainer have reached the highest results, you can immediately resume classes in the next version. 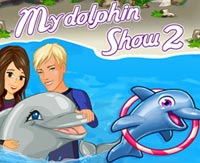 In the first part the young oceanologist will only get acquainted with his wards. Being in the open bay, the player will try to tame the dolphin and start teaching him tricks. In this game, the process is somewhat different from the following parts. The user needs to accurately calculate the strength and trajectory of a pet jump, only if the laws of physics are strictly observed will the animal be able to perform the correct trick and collect all the bonus stars. 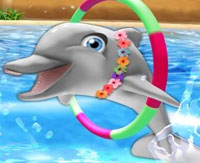 In the second part, the hero has already reached heights. His first performances take place in a small resort town. The main goal is to attract viewers to the performance, only in this way will it become popular. If the players cope with the tasks, then the tour continues, so in the third part there is already a choice, a simple show or a limited time. Control is different, here the pet player can control the arrows on the keyboard.

Version game Dolphin show 4 brings users to the professional scene. There were enough spectators in the dolphinarium, but there are still vacant seats. The better the performance, the more people will come to the next performance, which means the fees will increase significantly.

Fifth and sixth are similar to the previous ones, young artists gain recognition of the audience. With each performance, the tricks become more complex, players with their players need to train in order not to disappoint spectators.

Part of the game Dolphin show 7 will delight fans with new scenes and spectators. Collecting applause, users earn a game currency, for it in the store you can buy various decorations for the star show – bows and outfits. After completing the performance with various rare beasts and birds, for example pandas and zebras.

Version of the game Dolphin Show 8 – apogee of glory. Beginning artists will receive full recognition and surprise spectators with the most difficult tricks in the history of performances. Now travels not only the trainer with his animal, on tour to different countries the circus of the player is called, and tickets can be bought only in advance.