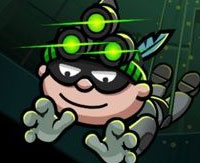 There used to be a guy named Bob in the virtual world. He was an honest and kind young man who wanted justice. Time passed The boy grew older and before his eyes the reality opened, it was not pleasant, the laws were trampled on every step, corruption flourished, and the mafia did what it wanted, and the poor barely made ends meet.

Games Robber Bob is told just about this hero. Bob grew up thinking of becoming a policeman, but everything turned out to be not so simple, honest people were not needed even to protect the order and the law. Then Bob went to the dark side, the deed of his life was stealing. The guy realized that the only way he can help the needy. A noble criminal began to search for and rob the caches of gangs, and to transfer money to charity. Players will have to help Bob and at the same time show care and ingenuity that the offender is not caught, and those in need continue to receive help.

The game was extremely exciting and got the highest ratings. The authors continued the series, today you can start playing with the first part and finish the adventure together with the hero in the third, step by step restoring justice.

Free games Bob the Robber do not have any restrictions, they do not have a built-in store with real money calculations to get some bonuses or get out of prison in case of unsuccessful robbery. Download and install any part is not necessary, they are all downloaded directly on the site in just a couple of seconds.

Features of games Bob the Robber 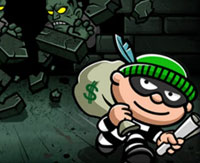 Starting its hard way, the bean leaves for an abandoned, but well-guarded warehouse. This game story Robber Bob 1, his goal is to take money away from the criminal group. The Mafia completely subjugated the whole city, under their control banks and casinos, businesses and restaurants. The police are inactive. Develop a plan for the thieves did not have time, so he, under the strict guidance of the player should make the most effort to successfully complete the operation, namely:

The job at first glance is simple, but it's not so, the watchful eye of surveillance cameras and security are ready at any time to raise the police alarmed, and if she grabs the thief, he will be imprisoned for a long time. 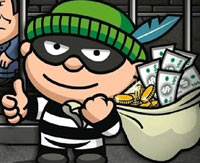 Part of the game Bob the Robber 2 continues the story of a talented attacker. This time Bob realizes that the mafia has raised his head again. He caught an eye on the article in the newspaper that the court acquitted the criminals whom Bob helped plant the last time, it was time to continue the business, and this time to get so many clues that the leaders could no longer turn away and they did not have enough money to bribe the judges. With each level, the task will be more and more complicated, but if you are careful and attentive, you can cope.

Of the last part of the game Bob the Robber 3 becomes clear, the young man has achieved considerable results and became a legend. People began to address him in search of justice, here an elderly lady asked Bob to go to a distant country. In this version, the gameplay becomes even more interesting, the thief will have to manually learn how to open locks, without weapons to cope with security and collect all the necessary clues against the villains, while not forgetting to get hold of the money.

All issues of the game Bob the Robber are very entertaining, they will appeal to children and adults. They have all the attributes of a detective genre, the danger of being caught and the excitement.