In the game Sushi cat play like users of all age categories, they are great for recreation and leisure for both children and adults. As the name suggests, the hero of the games will be a cat, and the delicious sushi dish, suggests that this cat came to the players from the country of the rising sun. 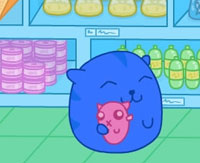 Kot in games is very similar to the wrestler from the traditional Japanese fight Sumo. Like these giants, it is very full, but rather even round. Short paws do not prevent this cat from rolling. Even the hero of the games has a remarkable ability, he bounces off from any hard surfaces, and eating sushi in huge quantities increases in size. The goal of the players in any case not to let the cat lose weight, and decrease.

The first game about the cat lover of the land got the highest ratings, and the best reviews among the players. The authors did not stop at the release of just one game and over time, there were 5 more options for continuing the adventures of a funny cat. All games have a story, in each part users can see the whole story of cat's adventures and help him cope with the problems.

In all games Sushi is free to play at any convenient time, there are no real money payments in them, so all the results depend solely on the skills of the players, and not on the purses. You can start the entertainment without delay, all versions are available directly on the site without a boring download and registration.

Excursion into the world of Sushi Cat 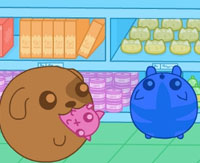 Game Sushi Cat 1 begins the adventure of a fat girl, passing along the street the cat met a beautiful stranger, a pink cat, she cute warmed herself in the sun looking out the window. It was love at first sight, the cat as a true gentleman immediately decided to get acquainted with the sweet lady, but he did not manage to get into the door. Disillusioned hero decided that whatever happened would not attract the attention of a charming person, for this he will go to eat, so he will grow up and be able to look into the window. The game will make players remember the laws of physics, trajectory and ricochet. You can feed a cat by dropping it from a height, so that it flies over the playing field, set with various obstacles, in the flight, eaten and fell into the box with bonuses. The cat is soft and springs easily, so it will rebound like a ball from all hard surfaces. 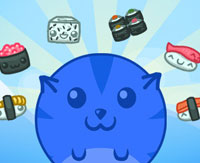 Game Sushi Cat 2 will transfer players to a huge shopping center, the hero went shopping, but with him there was an unforeseen. The cat has a favorite toy, she was kidnapped by an ill-bred dog. The cat got angry in earnest and tried to catch up with the offender, but the elevator doors slammed right in front of the hero's nose. Now he needs to grow up to reach the button of the elevator call. In this version, the authors have complicated the passing levels:

The obstacles in the game are of different shapes, you can slide about the triangles, but in order to successfully fly and collect all the objects near the round obstacles you need to take a good aim and calculate the cat's fall.

Game Sushi Cat 3 catapult differs in the gameplay from the previous options, here players will have to launch the cat in flight using a wooden device. Users need to press in time to make the impact strong. A flying hero absorbs all the sushi on his way, well, at the end of the race, if he is lucky, he can once again push away from the bonnet of the mushroom or belly of the wrestler sumo. As long as the cat does not fly all the way, the player will not be able to move to the next level.