Travel can be by any means, moving on a vehicle or on foot. Ordinary tourists do not attract attention if they do not invent the original way to wander. Even computer toys compete, offering more and more new ideas, and Amigo Pancho's games can be considered successful, because they simultaneously contain logical tasks and an unusual way of traveling the lead character. 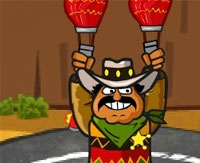 Pancho has adapted balloons for flights, and is very pleased with his invention, because it works perfectly. He holds on to the ends of the laces, which hang from the balls, and they lift him to the clouds. You just need to follow the direction of the flight, and have time to remove obstacles on its way, working with a mouse. Press it on objects and Pancho to pave the way through the game levels.

Games Amigo Pancho abound with adventures and dangers. With the hero you will rise above the highest canyon and visit different countries. He steadfastly endures the deprivations of a hot desert and predatory jungles, without letting balloons out of his hands, boldly meets with difficulties, among which: 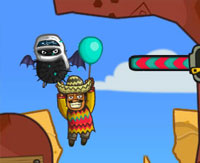 Each meeting can be the last one, if you do not figure out how to slip past the shooters or a complex structure, full of sharp edges, explosive mechanisms, and other obstacles.

Logic, attentiveness and ability to foresee the situation will help you. It is necessary to remove the crossbeams, to put obstacles, and to allow the bandits to shoot each other to free you the way forward. If you find the right sequence of actions, you can effectively move forward until you reach the last level.

Being careful and knowing how to think outside the box, you will uncover some management tricks. Sometimes an exception method from the rules will help. For example, if everywhere you try to keep the balls whole, then in some cases you will get to the artifact only on one ball, so the second one must be put under attack. 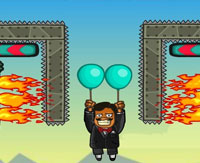 The trainee enters into the taste of the

If Pancho's first ideas were bold, then they became ambitious. He had time to admire the greatness of the Mexican canyon, to look at other attractions of the country, and now he learned about new excavations in Egypt, and rushed there to get in touch with ancient history. Game Amigo Pancho 7 tells about the next adventure of the hero, who will happily take you to the company to obtain historical values.

To get to every object (statuettes of a person, a pyramid, a cat, a beetle, a camel and others), one must pass through the corridors of the pyramid, and not perish in traps set up. In comparison with the initial levels of the first games, you will have to think carefully about every step, but that's why Amigo Pancho games are so popular with all generations of gamers.

Climbing to a brave Mexican, you will not leave it halfway, experiencing the real excitement of the discoverer. This adventurer is ready for the most dangerous, impassable difficulties, and hopes that you have the same unbridled curiosity as he. Keep the logic ready, and let it become your main weapon in the upcoming fight against obstacles and obstacles.