Suzhet game Tasty planet at first glance cool reminds of the fun"Petri dish", in which one manages his own microbe. Although common features are observed, but in this case you have a completely unique idea, where you do not have to defend your own life from other players. 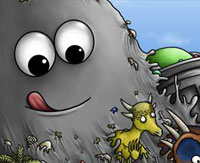 In the beginning you will enter the laboratory of the game Tasty planet, and find out that a certain professor has finally deduced the formula over which he worked so long. For many years he was looking for a universal tool that can easily get rid of any dirt from the surface without damaging the thing itself. Judging by his enthusiastic cry:"Eureka! ", He managed to achieve a positive result. Now it remains to conduct several experiments in the laboratory, and it is possible to start the preparation.

Now about the most interesting

Open the game Tasty planet, you fall into the microcosm, where the bacteria reign. The brainchild of a professor can be easily distinguished by large and curious eyes. Managing the baby, help her to get to the accumulation of crumbs of dirt, so that she regales with them, and grew up. The more she eats the garbage, the more it will grow. 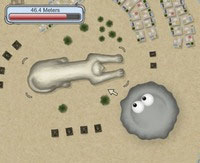 Unlike many similar games, everything happens here very quickly. From small and helpless, the bacterium quickly becomes big and formidable. Her sides are swollen, and snakes and petals are snaking around. At the first level you can feel safe, because this is a training game stage, so that you are used to management and maneuvers. Act quickly, in order to gain as much weight as possible in the allotted time, because the final points depend on this.

Now you can explore new territories. Each conceals new riddles, opportunities and amazing discoveries. It will be interesting to see that there are other primitive forms of life besides you. They are not controlled by anyone, and they do not pursue you, but if you hesitate or accidentally fly from the dispersal to a large individual, you can say goodbye to life.

It's necessary to act quickly, but carefully, remembering that there is a lot of danger around. Anything less than you can safely eat, gaining a temporary color of the captured victim. But beware of collisions with those who exceed your bacteria in size, otherwise you will instantly die. This means that the level of the game Tasty planet will have to be replayed. One day the professor thought about it-and should not the bacterium be made more universal? If she is so superbly coping with pollution, can, will manage to destroy and harmful parasites inside a person? 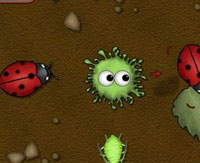 After several changes in the formula, he really managed to make a breakthrough. At first the idea seemed really good, but later there were dangerous symptoms. Once in the blood, the bacterium began to work with the same rage. To grow a little, at first she fed on blood corpuscles, and then began to work harmful microbes. The mission, it would seem, was successful, but this is only the beginning. The plot of the game Tasty planet continues to carry on more and more. Once a small organism is not enough crumbs, and it begins to absorb more complex forms of life – grasshoppers, flies, beetles. After them comes the turn of mice, cats and dogs. To quench the hunger of food more and more, and one day a monster can swallow an entire planet.

The toy is captivated by the simplicity of the idea and by gambling gameplay. This is the case when the product is ideal for a wide audience of players.