Judging by the fact that the games of Siege Canterlot are becoming increasingly popular among girls, they also like to be strong. Now no boy will say that girls do not understand military topics, they can not apply successful tactics. However, although before you the classic version of"tower defense", the differences from purely masculine games, nevertheless, are observed.

First of all, it concerns the weapon. In the plot of the game, Siege Canterlot has no piercing, cutting and gunshot arsenal, as there are no soldiers in chain mail or bulletproof vests. Instead, magic ponies sprinted from the fabulous country of Equestria. Let a quarrel take place between them, and let them now find out the relationship, but as an ammunition they use magic, gems and muffins. Cartoon"Friendship is a miracle"formed the basis of the game Canterlot siege, and your task is – not to let the enemy get into your city.

Readers of the game Canterlot siege

What happened between the ponies, the history is silent, but the conflict is obvious. It is up to you to solve it, even if you introduce martial law in Canterlot.

Get ready for a massive enemy attack on all positions. In total, 30 attacks are to be repulsed, but only if each one succeeds for you, and you will not let a group of dark ponies enter the castle. To do this, you should arrange the best stallions around the perimeter, so that they act in a way that is accessible to them. 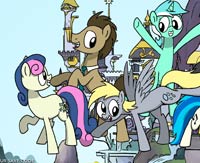 The next attack will happen after the counter at the bottom of the screen has counted down the last seconds, and until this point, many important preparations have to be made.

First of all, use the available 125 bits for the purchase of soldiers, and place them along the guarded area. Opening in the special section of the game Canterlot siege characteristics of horses, choose what qualities you would like to pull up. If you make the preparations before the deadline, you do not need to wait for the automatic gong to work, or you can press the call button – Next Wave. 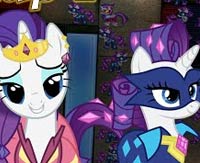 Stained minutes bring additional bits, and they will be useful for pumping ponies and buying new ones. And you can make manipulations even at the moment of the battle. But to change the alignment of forces in the course of events will not work, but you can recall the pony, returning the currency spent on it. And the more perfect he was, the more coins will help out.

It's useful to know the information and about the enemies, and therefore when you hover over to Call Next Wave you will see how quickly enemy horses can move along the path, how quickly they lose strength, and what will bring victory over them. Once you will be available bonus level of the game Canterlot siege. There will be a battle with the main boss and an orbital cannon of friendship will appear. Activate it for 200 gold, and you can inflict 10000 damage.

Now let's see who will stand up for the defense of the castle of your city. Choosing, focus on the skills that are owned by small, but such brave horses.