Funny games of the trolls 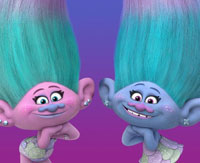 Games about the trolls will transfer the players to the magical world of the same animated film, released in 2016. It tells a wonderful story about friendship and optimism, these qualities provide an opportunity to cope with any problems and turn existing evil into good. The story in the cartoon begins with familiarity with cute creatures, they are so gay that every day they have a holiday. But they are not the only ones in this virtual world, next to the dreary marshes there live bergens, trolls the same, but they are sullen and spiteful, all that these creatures want, so that on faces there are never more smiles. Heroes of history, the following:

In the middle of colored creatures and bergens there are many more heroes, they will be able to meet with them, playing trolls online.

One day the bergens raided a peaceful village and captivated everyone, except for Rosochka and Tsvetana. They had no choice but to set out on their journey, save their friends and subjects. Rosochka is very cheerful, while her companion turned out to be a very gloomy pessimist, seeing only the problem in everything. As far as such different types of personality can successfully act together, it becomes clear from the cartoon itself, and you can play free games of trolls free of charge while doing different things together with your favorite characters.

The variety of trolley games 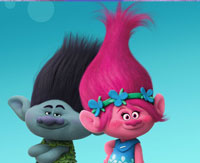 The history shown on the screens of the cinemas was liked not only by young spectators, but also by adults. The light saw a whole series of games, some versions are developing, others are entertaining, and still others will distract from everyday problems and worries for adults and send them to a colorful fantastic country.

Developing games are diverse, playing in them children and adults will be able to practice visual memory, memorizing identical serially opening images. Playing games trolls quest develops logical thinking, and puzzles will help children with spatial thinking and will give an idea of ​​how the small parts get the whole. Whichever way a game could be managed, in any case it is an excellent exercise for fine motor skills.

Members like to create your own hero or just to show your imagination and paint a picture with a cartoon character. So it can turn out to be a very funny creature, and parents will then be able to save the work of the young artist and print it on the printer. 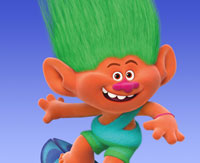 Games for girls trolls will offer novice fashion designers, stylists and make-up artists to work wonders with outwardly strange creatures. If you creatively approach the image of heroes, you can make them real beauties and beauties who can seriously compete with real models on the covers of glossy magazines.

The main characters will fall into the adventure in the game «Trolly in the labyrinth». They are waiting for a hard and dangerous path and only if users show wit, the characters will get out of the predicament. Each level throws new challenges, ahead of dense green thickets, fallen trees and even the lands of evil giants lurking small heroes behind the high fences.

All games feature stunningly beautiful graphics, the colors in them are bright and rich, and the characters are similar to those just come down from the screen of the cinema. In the background, merry soundtracks from the animated film sound, and all actions are accompanied by sound effects, adding realism to what is happening on the computer screen.