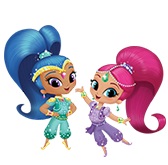 V Shimmer and Shine game to play for free like all fans of the wonderful cartoon series for children. The first season is released in 2015, the authors first announced the suspension of the shooting, but then changed their minds, and in 2016, viewers saw a continuation of the series.
Players, as well as the spectators are transported to the magical land inhabited by genies and magicians.

Istoriya in the cartoon tells the story of a cute girl named Leah, she has a secret, Leah has a magic lamp from which she call there are two witches, or rather gin, one called Shimmer, her blue eyes and pink hair, and a second Shine, her violet eyes and blue hair color. Leia every day there is an opportunity to think of three wishes. Gina's the same age as Leah, they just learn to perform miracles, so do not always work out exactly what was planned. But they manage to work together to achieve the desired result, despite all the mistakes.

In addition to the main character and her fairy friends in the animated film, there are other characters:

Vseh these characters can be found not only in the cartoon, but also playing games Shimmer and Shine for free. They do not need to download, they run online, no registration required. Children can run on their own game if they want to play with their favorite characters. 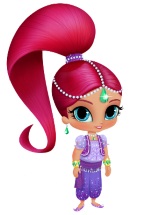 Games with magic jinn and girlfriend Leah released enough, one will be perfect for kids entertainment, in the other it will be interesting to spend time school-age children. All options are not just a fun pastime, but also a great learning process in the form of a game. Kids like to be creative by painting characters from the cartoon. In this embodiment, do not just click on the color and paint the selected area, and use the mouse as a brush, choosing the color and line thickness.

V soon expected to release versions of the game Shimmer and Shine in Russian, but as long as for those who are confused by the English, can be a good time folding puzzles or developing memory. Puzzles are available in several versions, they do not have tips, so that will have to cope with a picture yourself. Coaching memory remembering where the images are paired, and after they are closed find it useful to players of any age.

Igry Shimmer and Shine Dress created for fans of transformation, Gene came from the Arabian Nights, in a cartoon witch dressed traditionally for their sites. Fashionistas can correct monotonous robes Shimmer and Shine dressing them in costumes or other sending to the western party.

Igraya users can meet the desires of Leah, for example, to turn it into a real fairy princess, with castles, towers and dragons and princes, while still removing all of these on a film camera.

Games for Shimmer and Shine girls will take players into a fairyland, which is in a magic lamp. There young gins have a wonderful palace, but they lost all the drugs in the vials. The players need to help the girls managed to find them looking into each room and opened all the cupboards.